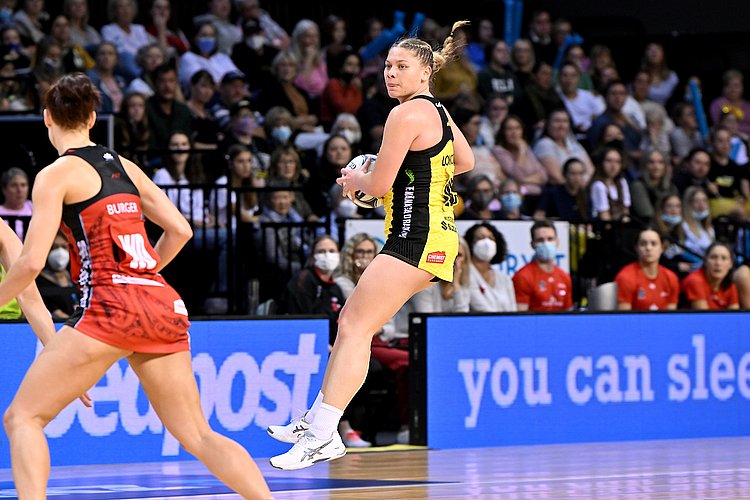 Pulse wing defence Paris Lokotui produced a player of the match performance in the win against the Tactix. Photo: PhotoWEllington

A dominant final quarter set up Te Wānanga o Raukawa Pulse for their fourth win of the ANZ Premiership, but it took three quarters of grind against a dogged Tactix unit to claim maximum points.

It was a superior shooting percentage and a staunch midcourt defensive zone which proved the difference in a torrid affair at TSB Bank Arena in Wellington with the Pulse winning 58-41 in front of a nearly packed house of 2333 noisy supporters.

``It was amazing. You could actually feel the energy and it’s one of those things that you don’t know it until you come back to it and they were equally fair to both teams in terms of good play,’’ Pulse coach Yvette McCausland-Durie said.

``It was lovely to have them back and it’s an awesome stadium to play in.

``I was pleased to get the win. I thought we were more disciplined than we have been in the past around getting to circle edge. It wasn’t error-free but there was a greater commitment to task and there was some good defensive effort around getting some ball.’’

Finishing well had been a focus for the home side and the seven on court delivered in the last spell, which they claimed 19-8, for their second win on the trot.

The Tactix will be left ruing a disappointing fourth quarter having kept in touch with the Pulse for much of the match – three games in the space of seven days possibly taking its toll as the clock counted down.

It was an intense and defensive first 15 minutes of play which set the tone for the match, delivering inaccuracies in plenty of the basics as both sides struggled to settle into any kind of rhythm.

The opening stanza was a low-scoring messy affair with neither team able to capitalise on early turnovers – every pass put under pressure and the shooting accuracy from the Tactix taking time to warm up with Te Paea Selby-Rickit and Ellie Bird netting just under 70 percent of their attempts at goal.

Sparked by two big intercepts from goal defence Karin Burger, the Tactix were finally able to convert to edge ahead 7-5 with five minutes left in a forgettable first spell.

But a string of three goals from Pulse shooter Aliyah Dunn put the Pulse ahead 12-11 at the first break and a suffocating defensive effort immediately after the break saw the hosts extend their advantage on the resumption of play.

The Tactix were unable to generate any flow through the midcourt thanks to the yellow wall they were met with, and with accuracy in the shooting circle still hurting the visitors, the gap opened to five.

McCausland-Durie turned to her bench with five minutes remaining in the half as Maddy Gordon, who continues her return to play from injury, was injected into the game at wing defence.

It was quickly followed by personnel changes from the Tactix with Marianne Delaney-Hoshek introducing Kate Lloyd at goal defence, Burger shifting to the wing and Charlotte Elley at centre while captain Kimiora Poi picked up the wing attack bib.

Poi in particular added some speed to the Tactix attacking efforts but getting clean ball over the long reach of Kelly Jury and Kristiana Manu’a continued to be a struggle for the red-and-blacks as they went into the main break trailing 22-26.

Tactix defender Kelera Nawai-Caucau continued her improvement at this level with seven gains by halftime turning in her best performance of the season against her former team-mates.

With a five-goal lead, the Pulse made a surprise move with Amelia Walmsley replacing Dunn in the shooter’s bib – the latter needing time to get her ankle strapped before returning to the court.

A warning to Nawai-Caucau for dangerous play could have derailed the Tactix’ defensive efforts but the visitors worked hard to disrupt the Pulse circle.

With just over five minutes left in the quarter Delaney-Hoshek looked for a new dynamic in the shooting circle with Selby-Rickit replacing Bird and Vika Koloto coming on at goal attack.

But it was further up the court where the Tactix struggled, finding it hard to penetrate an impressive Pulse midcourt defensive zone which was spurred on by a large and noisy home crowd.

A blood call on Selby-Rickit late in the spell allowed the Tactix to make more switches on court – Burger returning to the circle, Elley to the wing and Samon Nathan returning at centre – but the visitors could do little to stop the Pulse from heading into the final stanza with a 39-33 lead.