Teenaged rookie lapping up life with the Pulse 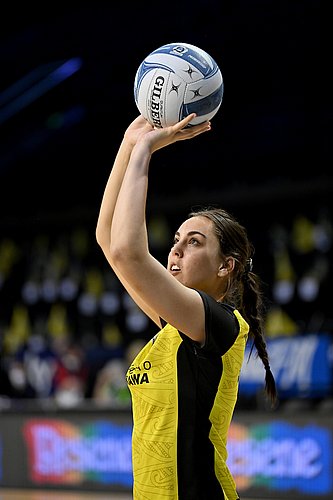 Young shooter Amelia Walmsley is excited to be learning her trade with the Pulse. Photo: PhotoWellington

Despite her tender years, rookie Te Wānanga o Raukawa Pulse recruit Amelia Walmsley had no hesitation about leaving the comforts of home to give top level netball a crack.

In a few short months after what was a whirlwind turn of events, Walmsley swapped her Howick College uniform for that of a semi-professional netballer after making headlines last season when filling in as a temporary replacement player for the Tactix and slotting in like a seasoned hand.

Turning 18 in January, the 1.92m shooter is the youngest contracted player in this year’s league, taking everything in her stride after making the big decision to leave her Auckland home for the new environs of Wellington. So far, it has been the smoothest of transitions.

``It is pretty much as I expected,’’ Walmsley said. ``I had a high expectation about the work ethic and it’s met that.

``I’ve always been quite an independent person so when I got offered the contract, I sat down with Mum and Dad to talk about it, and this (coming to the Pulse) just seemed like the best opportunity for me for this time.

``So, moving away wasn’t really a factor that played a big part in my decision. There are certainly no regrets. I had been hoping to get a contract and I was just so excited and really thrilled, it’s an amazing opportunity.’’

Playing a leading hand in the Northern Comets run to last year’s national league final, Walmsley has embraced the new requirements and constant demands of playing at the higher level.

``There’s definitely a big step up,’’ she said. ``The physicality of the game is a lot more than what it is in the national league. It’s still hard work in the national league but I have adapted pretty well. There’s just more of everything…..like training, travel, intensity…..and it’s constant but I’m loving it and having fun.’’

Still learning her trade and with limited minutes for the Pulse, Walmsley is keeping her hand in by getting plenty of opportunities with Central Manawa in the national league where she has continued to post high shooting numbers.

``Because Anna (Andrews-Tasola) is the specialist coach of the shooting end for the Pulse it has made it a lot easier to put into practise at Manawa where she is the head coach, and she’s always reinforcing what we do at Pulse into the Manawa game play, which makes it quite easy to slot in and out of both teams,’’ Walmsley said.

``My goals for this season are just to soak up the whole environment. It is my first year of being contracted, so it’s just important to learn as much as I can and develop my game as much as I can, while also having fun and doing my best.’’

And there’s dad, former Black Caps bowler Kerry Walmsley, being the perfect foil in the background to help out with his input and advice when required.

``I get quite a few paragraphs from him,’’ the younger Walmsley said. ``He’s very good in the high performance/sport environment, so he’s got a lot to say all the time but it’s very valuable advice and he’s very supportive.’’

In the second of four games they will play in the space of 12 days, the Pulse meet the Tactix in Wellington on Sunday in what is shaping as a key clash.

The Pulse have yet to win back-to-back matches this season and need to keep improving their decision-making under pressure and accuracy on attack against an improving Tactix who have their full roster of players back in action.