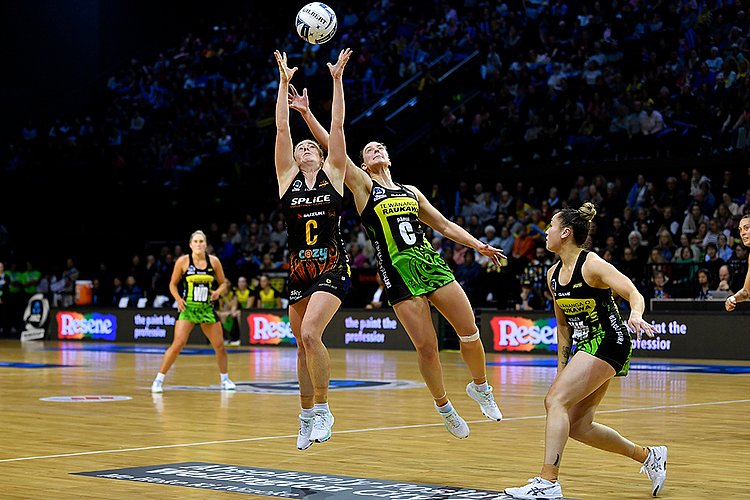 Defending champions Te Wānanga o Raukawa Pulse secured two wins on the trot for the first time this season to continue their move up the ANZ Premiership points table.

It took a late flurry of goals in the third quarter to help set up the 64-53 win over Waikato Bay of Plenty Magic at TSB Arena in Wellington on Sunday night, and they now sit in third place on the ladder.

The 11-goal victory also broke the deadlock of 15-games apiece between the two teams and will be a confidence boost for the Pulse heading into the second half of the competition – backing up from the win over the Stars last week.

``We had to work for that one,’’ Pulse defender Kelly Jury said afterwards. ``The first half was like a game of ping pong with the ball going back and forth and pretty much goal-for-goal. But it was really good that we were able to grind them down, break them in that third quarter and build a lead.

``It’s my first ever win at home since coming to play for the Pulse, so that feels really good to get a win in front of a home crowd for the first time and it was great we could give back to our fans and put a win on the board for them.’’

It was a big night for Magic captain Sam Winders who marked her 100th national league match but all eyes were perhaps on the visitors’ starting line with coach Amigene Metcalfe tossing up a few surprises.
Experienced attacker Grace Kara was given a start in the goal attack bib while Holly Fowler made a return to elite netball, coming back from a serious knee injury, to start at wing defence.

Just how successful the move of Kara was will be up for debate with the former Silver Fern showing her silky passing skills in ball delivery to Bassett, but lacking in shooting accuracy. The Magic ended with just two fewer attempts at goal than the Pulse but slipped with their radar, netting 76 percent of their 69 shots at goal.

It was the Pulse who made the first move on the scoreboard but the hosts could never consolidate in an error-ridden first quarter with both teams guilty of unforced errors. It took a flurry of quick goals to Aliyah Dunn in the last two minutes of the spell for the Pulse to extend a slim advantage, heading into the break with a 16-12 lead.

The arm-wrestle continued into the second stanza in a half peppered with turnovers – 22 in total – as neither side could claim the ascendancy.
The vision of both Pulse midcourters, Claire Kersten and Whitney Souness, impressed as they used all available time to wait for an opening in the shooting circle. It was the hosts’ superior accuracy in the circle which proved the difference in the first half, the Pulse leading 31-29 at the break.

Coach Gail Parata made her own surprise move leading into the third spell with Kersten reverting back to the wing defence role and Maddy Gordon taking on the centre job. Turnover ball midway through the stanza allowed the Pulse to edge ahead by five goals – the challenge was to see if they could build on the advantage against a Magic side refusing to stand down.

Metcalfe went to her bench during the third quarter with Fowler shifting to goal defence, Erena Mikaere to keeper and Georgie Edgecombe coming on to the wing. Another strong finish to the quarter was telling for the Pulse as they extended their lead to seven goals, 45-38 at the three quarter mark.

It was enough to give the home side some confidence as the likes of Souness and Gordon started to look long into the shooting circle while Kersten and Jury tightened the screws on defence. More changes were made to the Magic defence line with Georgia Tong replacing Fowler but it was not enough to stem the flow of ball into Dunn and Te Amo Amaru-Tibble.