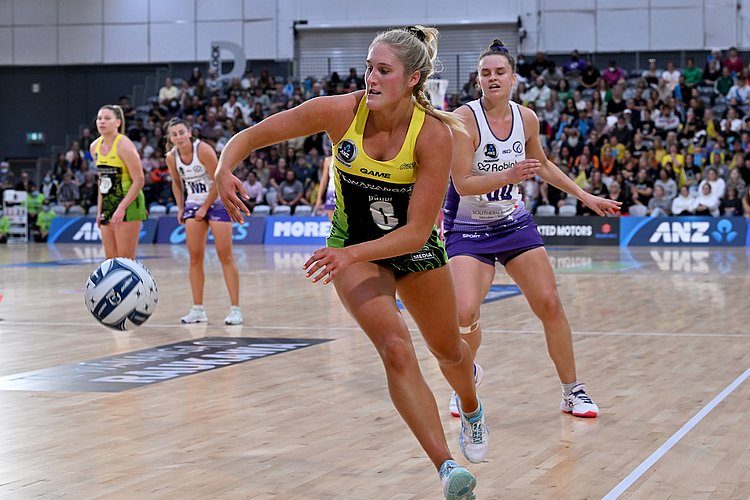 With stints at centre and wing defence, Maddy Gordon played her most minutes yet for the Pulse this season, adding another valuable contribution. Photo: PhotoWellington

With the match going down to the wire, Te Wānanga o Raukawa Pulse came up just short when the Stars turned the tables to post a 47-46 win at Fly Palmy Arena in Palmerston North on Sunday.

The Stars led for much of the Round 8 match having improved in every area from the meeting they had just five days ago when the Pulse had the better of their opponent by 10 goals.

Maximum Premiership points leaves the Stars in fourth spot but edging closer to the Pulse, who with a bonus point jumped to the top of the ladder on 18 points, and the second-placed Mystics.

``It was a great contest. I think the biggest margin was five, so an awesome match by both teams, and the Stars really lifted their work compared to how they played against us on Wednesday,’’ Pulse co-captain Kelly Jury said.

``We were most disappointed with our start, everything just felt really disconnected throughout that first half. So, we’ll look at that and see what little one percenters we can change because when it comes down to a difference of one goal at the end, it’s the little things that make the difference.’’

Both teams went for settled line-ups with Jamie Hume getting the nod for the Stars’ goal attack bib and repaying the faith in her coach with an MVP performance – sinking a number of crucial goals when the pressure went on.

Despite the Stars missing a couple of early attempts at goal, the visitors did enough on defence to keep the scores level and were the first to score from a turnover to edge ahead by two.

The defensive pressure from Anna Harrison, Elle Temu and Holly Fowler forced the Pulse to play patiently with no quick feeds into dominant shooter Aliyah Dunn and it was the shooters at both ends of the court who found the eye of the umpires early on with a number of offensive calls on Dunn and Stars captain Maia Wilson.

An early mixed bag from the Silver Ferns shooter was soon laid to rest as Wilson settled into her work with her strong connections with wing Gina Crampton and accuracy in the circle helping the Stars to a 14-9 quarter time lead.

Pulse coach Yvette McCausland-Durie made one change after the break with Maddy Gordon replacing Paris Lokotui to wing defence, but it was the Stars who again made the strong start to the spell edging ahead by six.

Confidence in the Stars’ shooting circle was streets ahead from just a few days prior as they were serviced well by both Crampton and Mila Reuelu-Buchanan, and the visitors’ ability to weather a challenge from the Pulse midway through the spell ensured they maintained their six-goal lead.

Finding any rhythm up front was troublesome for the Pulse with passes often pushed too far and flailing connections leaving few options. The switch however of Gordon into the centre role, in place of Erikana Pedersen, added some spark to the ball movement as the Pulse came within two goals of their opponents.

But this was a different Stars unit on court and with both Temu and Harrison hunting for ball along with the high volume of ball reaching the shooting circle, the visitors held onto a 28-24 advantage at halftime.

Stars coach Kiri Wills went to her bench for the second half with Kayla Johnson coming on for Fowler at wing defence and the Pulse’s struggles for clean and easy ball into their shooting circle continued – the Stars’ defensive unit having done their homework up front.

Jury answered the call for turnover ball, through her long reach and rebounding, as the Pulse went about chipping away at the lead – their grind helping the hosts level the scores with less than three minutes to play in the spell.

Both sides made further changes to set up a thrilling final spell – the Stars leading 38-37 at the three-quarter mark – with Pedersen returning to the court at centre for the Pulse and Temu and Harrison swapping bibs.

More personnel changes were made as the Pulse searched for an answer to shut down the Stars’ attacking efforts, the visitors holding strong in a tense fourth quarter.