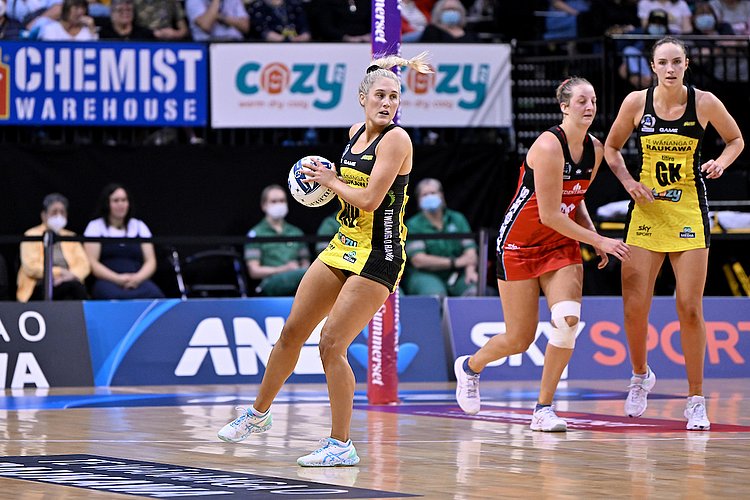 Midcourter Maddy Gordon was in the thick of action throughout for the Pulse in their win over the Tactix. Photo: PhotoWellington

Te Wānanga o Raukawa Pulse have taken the lead in the race for the minor premiership, grinding out a low-scoring 51-43 victory over the Tactix in Christchurch today.

When the two teams met exactly a week ago, the Pulse ran away with a 13-goal win. But the Tactix, in their final game of a testing 2022 season, wanted to give the home crowd a game to remember and stayed in the match until the final quarter.

And there were some heartening takeaways for the Tactix, with the impressive performances of young players Hannah Glen at goal shoot and wing attack Parris Petera.

Pulse goalkeep Kelly Jury, who leads the premiership in deflections and intercepts, continued to read the play precisely and took out another MVP award, while Maddy Gordon was in excellent form at wing defence.

The Pulse now top the ladder, and a victory over the Mystics on Friday will secure them the right to host the Grand Final.

``Tonight was an ugly win but it was still a win and was what we needed,’’ Pulse co-captain Jury said afterwards. ``It was great to get a bit of a buffer at the end but it would have been nice if that had come earlier.

Little separated the Pulse from the Tactix until halfway through the first quarter, when the Pulse’s intense pressure on defence began to wear the Tactix down, and the margin shot out to four.

But the Tactix made a tactical change, bringing Glen into the shooting circle for Ellie Bird.

Glen was confident from the outset with her high shot, which helped bring the difference back to two, 14-12 in the Pulse’s favour, at the first quarter break.

Gordon was all across the court at wing defence for the Pulse and making things difficult for the Tactix in the midcourt meant the home side stretched out to six goals.

But with Glen moving around the circle, drawing Jury out, it gave Te Paea Selby-Rickit more room to shoot. Their patience paid out and a streak of five goals brought them to within one, just before halftime.

The Pulse pulled away again to lead 27-24 when the teams went into the changing rooms.
But the Tactix weren’t about to let this one go, and with Kimiora Poi and Charlotte Elley marshalling the midcourt, and Karin Burger working overtime in the defence circle, they took the lead, albeit by one, with four minutes left in the quarter.
Again, the Pulse took control as the quarter ticked down, but this time they were up by only one, 37-36.
Bringing Courtney Elliott on at wing defence – with Gordon moving to centre - gave the Pulse some new steam, as Gordon and Whitney Souness did a great job feeding Metuarau and Dunn.
Jury continued to wreak havoc at the other end (ending up with four intercepts and nine deflections) and the Pulse’s extra time off between games showed as they pulled away.