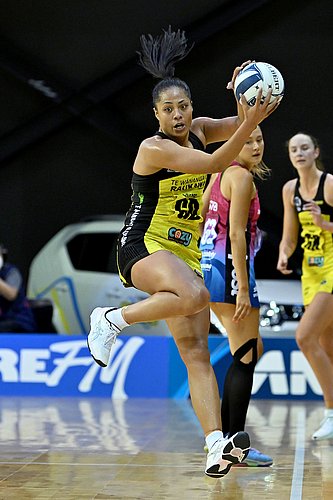 Defender Kristiana Manu'a has slotted seamlessly into the Pulse set-up and life in Wellington. Photo: PhotoWellington

Providing the impetus, a new home has played a key role for Kristiana Manu’a and the development of an increasingly potent Te Wānanga o Raukawa Pulse defence line during this season’s ANZ Premiership netball league.

After a lean couple of years on the playing front with the Giants in the Australian Super League, the powerful goal defence has gone from a bench role to full-on 60-minute player with considerable success after signing with the Pulse this year.

Steadily building, the tall, mobile and aggressive ball-hunter capped her rise with a player of the match showing in the Pulse’s latest outing, the 26-year-old now preparing for the team’s late season surge to make the Finals Series.

``My time in Oz wasn’t exactly what I wanted it to be and to come over here and get that consistent court time, obviously it’s really hard on the lungs and it’s taken me quite a few games to get used to it, but I’ve enjoyed every game,’’ the former Sydneysider said.

``I’m loving it. I’ve learnt so much this season. I think I’ve grown as a player and am hopefully still growing. I’ve loved my connections with all the players in the defence end and as a unit we’re really building as well, so that’s exciting.’’

With just one round remaining and three catch-up games to be played next week, there is still plenty of water to go under the bridge in what is shaping as an exciting and frantic race to decide the make-up of the Finals Series.

It has been a challenging and at times punishing season for all teams, a late postponement, due to Covid protocols, adding another twist with Saturday’s top-of-the-table clash between the Pulse and Northern Mystics rescheduled for Friday, June 3.

That eases some constraints for the Pulse, who will now have just the one match this round, against the Tactix in Christchurch on Monday. A lot of permutations still remain but it’s one step at a time for the Pulse who have slowly gathered momentum in recent weeks.

``Obviously, we’re aware of what could happen, what can happen but for us it’s about sticking to our processes,’’ Manu’a said.

``We’ve had little dips during the season which I think we’ve learnt from. We’ve taken lessons out of every game and built on those. We feel as if we’re still building. I really don’t think we’ve hit our full straps yet but it feels like we’re peaking at the right time and we just need to continue that hard grind, working for each other and with each other.

``Our recovery has been crucial but we’ve all pulled up pretty well. The adrenalin and excitement of the season helps push you along to what’s next and we’re holding up well.

``Being confident is good but we’re also really mindful of what could happen. We do have to win these games, we do want a home final, so for us it’s focussing on the process, not the outcome and to control the controllable.’’

At the beginning of the season, coach Yvette McCausland-Durie described her defence line as an ``unknown’’ but couldn’t be happier with what’s evolving.

``Top of mind for me about Kristiana is her really professional attitude,’’ the coach said. ``She works incredibly hard, and has got an ethic that no matter what, she just keeps giving and giving.

``And for us, that man-on style and that commitment to be able to run that hard is a real point of difference.

``The big thing with the defence unit was that it was going to be new and growing but the important bit has been that we’ve seen the shift in it. Each week you’ve seen Kelly (Jury) and Kristiana getting a better understanding and an awareness but now we’ve got the outside two in Erikana (Pedersen) and Maddy (Gordon) combining as well and the four are actually starting to have an influence and read off each other which has been an important growth and a real positive.’’