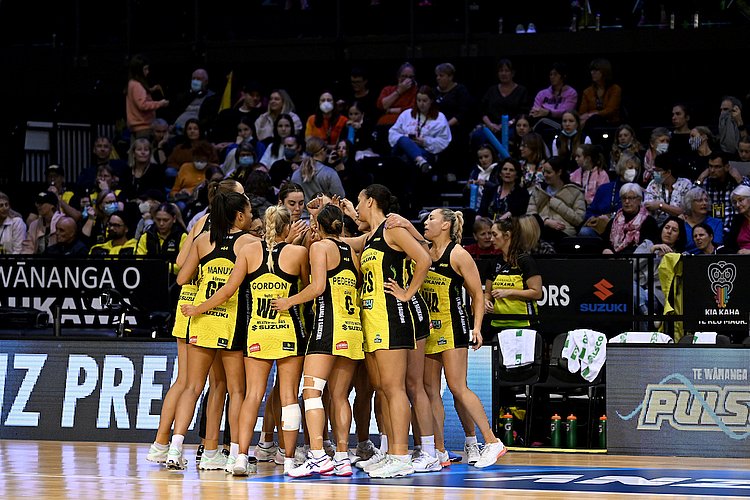 A home Grand Final is up for grabs when the Pulse and Mystics come together in the final round of the regular season. Photo: PhotoWellington

Timing their run to perfection, Te Wānanga o Raukawa Pulse will do battle for likely Grand Final hosting rights in a much-anticipated bumper showdown against the Northern Mystics in Auckland on Friday.

The Pulse have resided in the top three of the ANZ Premiership netball league table throughout the season before claiming top spot, for the first time, with a win in their last outing against the Tactix.

And now, in a tantalising offering, the Pulse and Mystics – the last match for both in the regular season – will put it all on the line as they seek to take the direct route through to a home Grand Final on June 12.

The Stars have a possible but improbable chance to trump the Pulse and Mystics but need to win their final two matches by substantial margins to make that happen.

Setting the early pace, illness and injury consigned to throw a spanner in the works for the Mystics, who slumped to three losses ahead of their catch-up game with the Pulse on Friday, and who come into the match as a bit of an unknown in terms of personnel and without having played for 11 days.

``They are an outstanding team with lots of talent and experience,’’ Pulse coach Yvette McCausland-Durie said.

``They will have taken some huge learnings from the last few weeks. They know what’s on the line as we do, so I’m expecting a really tough match.

``What we’ve talked about a lot in our analysis is for our players to be really aware that with the `return to play’ protocols, they’ll (Mystics) probably need to bring players on and off. That nature of constant change means new energy comes in, so we have to match that and make sure we hold our own jobs.’’

In a real grinding match, it wasn’t a pretty result for the Pulse against the Tactix, but on reflection, perhaps not a bad dress rehearsal for what lies ahead.

``The Tactix played really well and they were different to how they were the last time we played them (when Pulse won by 13),’’ McCausland-Durie said.

``They used a lot of movement, they worked really hard to cover the first receiver and they put us under some real pressure, so it was really good for us to feel what that was like going into this next match.

``It was a good match and I was pleased to see the grit in that backend and to have that ability for them to step up and have the confidence that they could get there.

``We always talk about staying in the fight and if you stay close enough, then eventually you will trust yourself to find those winning moments. You’d always like to win by more, but one’s enough.’’

With the short turnaround, tiredness and the general wear and tear experienced at this stage of the season, recovery is a key focus for the Pulse this week, backed up by analysis, light gym work and a short on-court training session ahead of flying to Auckland on Thursday.

``I’m really pleased with where we sit right now and from where we’ve come,’’ McCausland-Durie said.

``It hasn’t been easy. There have been moments when you can look back and think, `gosh, what it could have been’, but that goes both ways. There’s been lots of challenges in terms of injuries and players coming in, but overall, I think everyone’s adapted really well.

``We feel as if we haven’t played a complete game yet, so there’s more to do and with that the potential to be better.’’