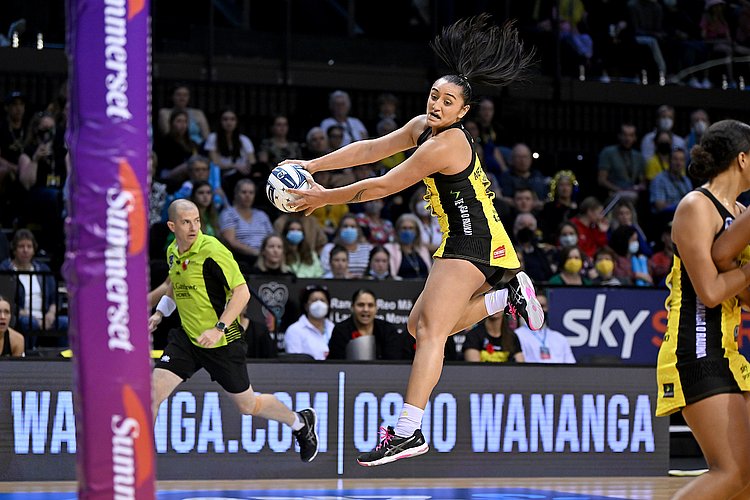 Goal attack Tiana Metuarau was a strong presence in the Pulse's dominating win over the Mystics. Photo: PhotoWellington

In the match to decided who would host the Grand Final on June 12, Te Wānanga o Raukawa Pulse won the right when outclassing an undermanned Mystics 58-40 in Auckland on Friday.

With key players Tayla Earle and Peta Toeava out with illness for the Mystics, the weight of expectation rested heavily on the Pulse. Negotiating a tight and competitive first half, the visitors eventually unleashed with a game-changing third quarter to leave the result in no doubt.

An unfamiliar Mystics line-up put up a more than decent challenge in the first half before losing their way in the second when the Pulse lifted the intensity in the rescheduled Round 12 match.

The Pulse managed to get all their team on court and will now have a week to prepare for the season finale while the Mystics head to the Elimination Final against the Robinhood Stars in Auckland next Wednesday (June 8).

``I’m so proud of the girls, we’ve worked so hard for this,’’ Pulse co-captain Kelly Jury said afterwards.

``A lot of people wrote us off at the start of the season, picking us to come sixth, so to finish off the round robin season in first, is pretty special.’’

With a midcourt decimated by illness and sharpshooter Grace Newke still out of action with an ankle injury, the Mystics were forced to call in reinforcements in the form of shooter Grace Namana and midcourter Ariana Cable-Dixon.

The Pulse fronted with their established starting seven of recent weeks.

Adversity brought the best out of the Mystics when they struck first after breaking the opening goal-for-goal exchanges. Looking assured and confident on attack despite the unfamiliar connections, the home side didn’t miss a beat in building a four-goal gap.

A Synergy Hair Netball League winner with Central Manawa and Pulse training partner, Namana showed her worth at the top level with an accomplished an assured contribution for the Mystics through her movement and accuracy under the hoop while shouldering the bulk of the home team’s scoring.

The Pulse recovered from their jittery start, finding their groove with better ball retention and top shooting from Aliyah Dunn.

Four straight goals helped the Pulse edge to a 14-12 lead at the first break.

The goal-for-goal stand-off continued on the resumption, the Mystics providing admirable resistance to stay in the contest.

The fruitful connection between wing attack Cable-Dixon and Namana continued to flourish as the pair belied the fact they had never played together before.

With rangy Pulse goalkeeper Jury becoming more of a disruptive presence, ably assisted by energetic wing defence Maddy Gordon, the visitors put the squeeze on the Mystics flow. A flurry of goals pushed the Pulse out to a five-goal lead and looking ominous.

But the Mystics refused to flinch, pulling the margin back to stay well in touch when the Pulse led 26-22 at the main break.

The Mystics made a bold gamble with the introduction of defender Phoenix Karaka to goal shoot to start the third stanza but it was the Pulse who opened with a hiss and roar. A 5-1 start set the visitors up for a rampaging third 15 minutes.

Increasingly finding their fluency on attack, where dynamic little wing attack Whitney Souness was in the thick of action through her fleet of foot and pinpoint feeds, the Pulse were provided multiple opportunities to build on their buffer. And they delivered.

At the other end, Jury continued to grow in stature and remained a persistent influence in grabbing ball and leaving the Mystics’ shooters with limited options. The Mystics struggled mightily to penetrate on attack with Namana being restored under the hoop, late in the piece, but by then the damage had been done.

Outscoring the Mystics 17-6, the Pulse were well in control when leading 43-28 at the last turn.