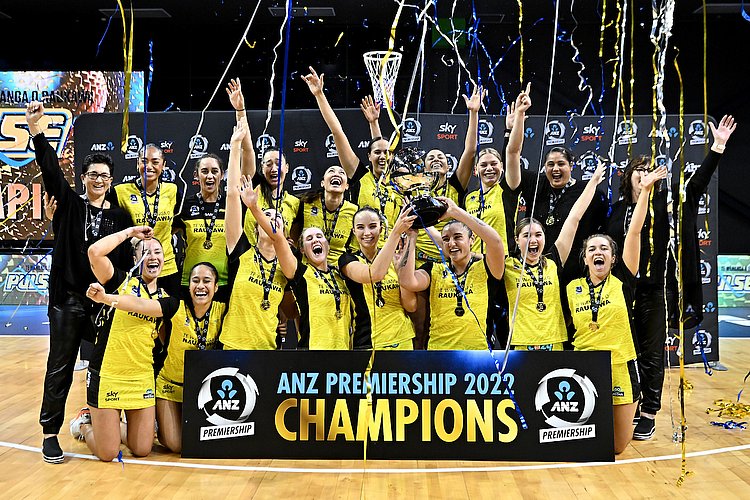 Writing a new page in the record books, Te Wānanga o Raukawa Pulse became the first team to win three ANZ Premiership titles with a 56-37 win over the Stars in Wellington on Sunday.
In front of a sold-out stadium at TSB Arena, the Pulse became the most successful team in ANZ Premiership history dominating the season decider with a 19-goal win – perhaps their most satisfying title yet after such a challenging year impacted by Covid-19.
Given little chance of reaching this year’s Grand Final, the Pulse overcame a nervy start to put themselves in the box seat at the first break and never looked back.
On the back of an all-round effort across the court they were superior in every position – from the back where co-captain Kelly Jury picked up eight gains, to Maddy Gordon who returned from injury this season for an influential role in the middle, Erikana Pedersen who answered a SOS call for the side at the start of the year and lifted her first Premiership title after three attempts, and Aliyah Dunn who missed just three of her 47 attempts at goal.
Their dominance on the scoreboard also allowed coach Yvette McCausland-Durie to get her full bench on court during the game.

``We trained a whole lot of things this week to be in a dogfight and a close match. The key was to get out of the blocks early and put some scoring pressure on and certainly that did happen and I’m just absolutely elated with them and so impressed with how they held their heads.’’
There were no surprises with either line-up as both coaches opted for the same seven which have started in recent weeks, enroute to the Grand Final.
Stars shooter and captain Maia Wilson opened the scoring to settle the team nerves and the defensive duo of Anna Harrison and Elle Temu were influential in turning the ball over at the other end to give the visitors the early lead.
Delivering clean ball into Tiana Metuarau and Dunn was a struggle for the Pulse, and it took three minutes before Dunn was able to sink their first points.
But their calming approach up front and the hard man-on-man defensive efforts saw momentum swing as the hosts built a four-goal lead by the midway mark of the spell.
Despite their early nerves, the Pulse ran rampant late in the opening quarter with Jury, Gordon and Pedersen claiming ball off the back of a strong defensive unit and six straight goals to Dunn saw the minor premiers go into the first break with a commanding 15-6 lead.
It prompted Stars coach Kiri Wills to turn to her bench with Holly Fowler making way for Kayla Johnson at wing defence.
An early turnover looked to spark the Stars with two quick goals, but Jury and Kristiana Manu’a soon quashed any quick revival hopes, gobbling up any cross-court ball as the Pulse regained the ascendancy.
More changes came for the Stars with Amorangi Malesala injected into an attack line struggling to find space and rhythm up front.
They closed the gap to six goals before momentum swung yet again in a frenetic second stanza, the Pulse surging again late in the quarter to score four successive goals and head into the main break with a 26-15 advantage.
The resumption of play saw no personnel changes in either side and while the Stars continued to pick up enough ball on defence, they were unable to rediscover the attacking form which had been a highlight of their performance in the Elimination Final just four days prior.
Trailing by 13 goals late in the third quarter, Wills went to her bench again with Temu moving back to goalkeep, Johnson sliding across to goal defence and Fowler returning to the wing.
Keeping the ball out of Dunn’s hands was key for the Stars with the league’s most accurate shooter for the last four years again the rock in the Pulse’s shooting circle.
Pedersen, who was playing in her third straight Grand Final after turning out for the Tactix in the last two, left the court late in the third quarter but returned to the action for the fourth spell with her Pulse side leading 42-26.