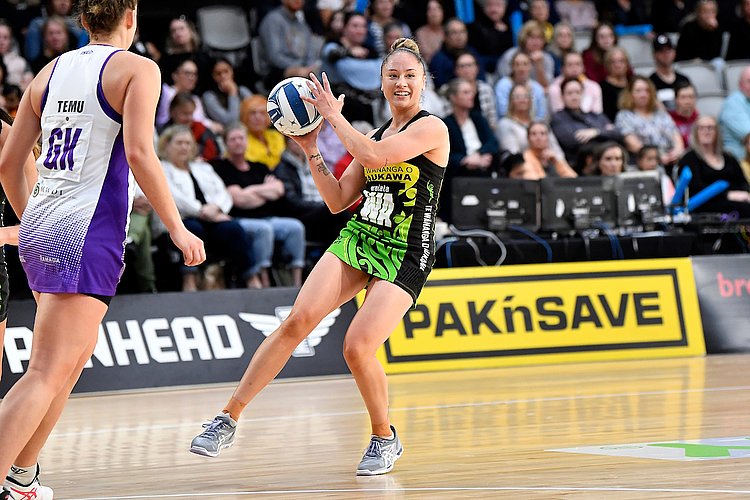 With the lead changing hands numerous times, Te Wānanga o Raukawa Pulse were left agonisingly short once again when the Stars survived an absorbing contest to emerge 55-53 winners in Auckland on Sunday.

Starting and finishing the match strongly, the Stars were overshadowed by the Pulse through the middle stages, a storming final stanza helping the home side reduce a three-goal three-quarter time deficit into a rousing win.

A tenacious final term by the Stars proved the difference, a trademark Anna Harrison intercept opening the door for the home side, the attackers retaining their poise to get the ball safely into the shooters’ hands, who responded without missing a beat.

The result left the Stars holding their position at the top of the points table and the luckless Pulse with yet another – their fifth – bonus point loss.

``A couple of things in that last quarter probably cost us a bit,’’ Pulse captain Claire Kersten said afterwards.

``On defence we could have put a bit more pressure on that first and second phase play and on attack, we were caught a little bit narrow which brought their defenders into it and meant we lost a bit of ball in that tight hustle around the body.

`` It’s the first time that we’ve been up by a small margin at three-quarter time and it was disappointing not to come away with the win. Still being able to play with freedom in the tight ones is something we’ll take away from this along with the bonus point.’’

There were no surprises in either team with Stars defender Harrison starting at goalkeeper to match up against opposing danger shooter Aliyah Dunn.

For the Pulse, goal attack Te Amo Amaru-Tibble returned from illness to slot in at goal attack while Kersten and Maddy Gordon swapped their usual positions to take up the wing defence and centre bibs, respectively.

On the back of slick through-court transition, the Stars got away to best of starts, bolting out to a 5-1 early lead as the Pulse made their increasingly familiar sluggish move out of the blocks.

With a relaxed Jamie Hume getting strong drives on attack while proving very accurate under the hoop and Elle Temu providing the defensive hustle, it was the Stars who kept their noses in front during the opening stanza.

The Pulse drew level but lapses on attack from the visitors ensured the Stars took a 17-13 lead into the first break.

With energetic little wing attack Whitney Souness leading the charge, the Pulse lifted their levels on the resumption. The speed, drive and vision of the wing attack opened up the spaces going forward for the Pulse, Gordon chiming in with her long-range feeds to Dunn, who responded with a couple of timely long shots to push the Pulse into the lead for the first time.

At the other end, powerful goalkeeper Kelera Nawai was a menacing presence in helping win extra ball for the Pulse, her long reach being a disruptive influence as the visitors posted five unanswered goals.

Respective goal attacks Hume and Amaru-Tibble were effective foils for their shooting side-kicks, the Pulse making their intentions clear when winning the quarter by six to take a 29-27 lead into the main break.

With captain Maia Wilson playing a strong hand under the hoop, the Stars made short work of levelling up the scores early in the third stanza. Both teams made little pushes with neither able to make a decisive move as they were reeled in.

With defender Oceane Mahi taking over from Temu and under instruction to hunt the ball, which she did effectively, it was the Pulse who made the small but telling move in the dying minutes of the stanza.

The defensive work of Kelly Jury and Kersten combined with patience on attack was pivotal to the Pulse taking a 44-41 lead at the last turn. However, the nip and tuck between both sides meant the game remained on a knife edge and still too close to call in the run for the line.