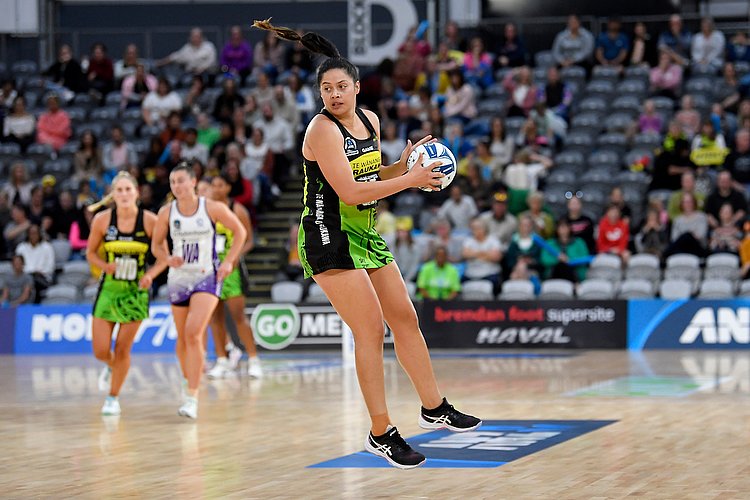 Shooter Te Amo Amaru-Tibble is enjoying being back in action for the Pulse. Photo: PhotoWellington

Thinking her time was probably done, shooter Te Amo Amaru-Tibble has put her years of netball-accrued savvy to productive use after returning to Te Wānanga o Raukawa Pulse following a long hiatus.

Last turning out for the Pulse in 2017, the inaugural year of the ANZ Premiership, Amaru-Tibble has come back from the cold in 2021, enhancing her presence with some stellar contributions where she is tracking favourably, statistically, as one of the best-performed goal attacks.

That’s all, initially, after expecting to play a lesser role from the bench but things changed quickly when Ameliaranne Ekenasio went on extended medical leave.

``I was expecting to come in and maybe have a quarter here and there,’’ she said. ``But to be honest, it’s any shooter’s dream to come in and either be paired with Aliyah Dunn or Ameliaranne Ekenasio. I mean, what a dream.’’

And in Dunn, she has found a willing and like-minded cohort. Having never met before, the pair has since found out they are related through Dunn’s Southland-based grandmother, who comes from Tibble stock on the East Coast, the shooting duo sharing Ngāti Porou family connections.

``I love playing with Aliyah. She’s really an unsung hero, the stuff she does out the back makes the stuff in the front so much easier,’’ Amaru-Tibble said.

``It was pretty quick for me to find the link with her. We have similar temperaments and we’re both kind of cruisy, so sometimes we need a bit of a gee-up.’’

Spontaneous bursts of laughter and a light-hearted demeanour come naturally to Amaru-Tibble which is probably just as well after finding herself returning to a new age of elite level netball.

Playing for the Pulse in 2008-11 and 2016 in the former trans-Tasman league, the 1.82m Amaru-Tibble also played for the NZU16, NZU18, NZU19 basketball teams and was a junior Tall Fern. She has continued to play club netball and basketball in the intervening years.

Having to adapt after a long time away has been a big challenge but age has gifted her the most valuable of commodities, street-smarts.

``My body has been moving (club play) but this opportunity has definitely come out of left field,’’ she said. ``It’s tough but it’s an awesome opportunity and I’m thankful I get to have another go.

``I have found it a lot faster. The girls are so much stronger, the level’s really gone up a few notches and I think that’s led from the top, from the Silver Ferns, who are really pushing the boundaries and leading from the front. You can definitely feel it across all teams.

``It might be the age too, (Amaru-Tibble turns 32 next week), but I’ve had to put in a lot more extras to get in a position to be on the court.

``You can’t commit this many hours to a training programme like this and not enjoy it, you have to enjoy it.’’

One of three mums in the team alongside Ekenasio and defender Kelera Nawai, Amaru-Tibble has two daughters Mereana, 9, and Ngawhata, 7.

And if being a mother and semi-professional netballer wasn’t enough on her plate, Amaru Tibble also finds time to teach three days a week at Te Rangihiroa Ngati Toa School in Porirua.

After a win and two bonus point losses, the Pulse meet the Northern Mystics in Wellington on Monday.

``The two games we’ve lost so far, we didn’t have good starts and we’ve proved in both that we can do the catch-up but this week, let’s not have to do the catch-up and really start with a bang in the first quarter,’’ was Amaru-Tibble’s simple approach to posting a second win.