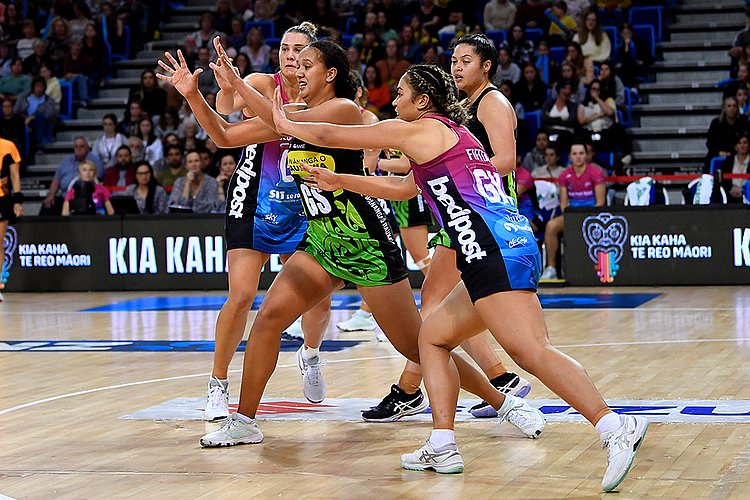 Aliyah Dunn was a forceful presence for the Pulse under the hoop with an impressive shooting return of 39 from 40. Photo: PhotoWewllington

Te Wānanga o Raukawa Pulse suffered another heartbreaker when losing 56-52 to the Southern Steel in an even and tightly-contested match throughout at Te Rauparaha Arena in Porirua on Sunday.

In the process, the Steel opened up some breathing space on a tight ANZ Premiership ladder by netting their first win on the road this season, the win consolidating the southerners spot in third place, now three points clear of the defending champion Pulse.

But it took every ounce of southern fight to snatch the win in what was a thrilling and fitting match to celebrate and open the ANZ Premiership’s Heritage Round – the Steel and Pulse the only two teams to have lifted the spoils in league history.

Four goals separated the two teams when they last met in Round 3 and the opening blows suggested a similar close battle was set to unfold.

``We were up and down in that game,’’ a rueful Pulse midcourter Whitney Souness said afterwards. ``We just couldn’t get ahead. We would get close and then make a run of errors. We also struggled a little bit at times to bring the ball through court.

``It is getting better, it’s there and it’s not as if we’re not trying. We’re just not at the stage where we’re connecting for the whole four quarters, that consistency element is missing.’’

The early deadlock was broken by the Pulse with the long stretch of Kelly Jury troubling the Steel shooters into errors, but with both teams desperate to make a move on the league ladder it wasn’t long before it was again even on the scoreboard.

A run of five unanswered goals gave the visitors the first real break as they ended the quarter with an 18-14 lead.
The connection between captain Shannon Saunders and goal attack Tiana Metuarau gave the Steel the edge while Player of the Match, Kate Heffernan, was a key link from defence onto attack.

In contrast, the Pulse again looked disjointed up front as their connections into shooter Aliyah Dunn went missing at crucial times.

Steel coach Reinga Bloxham made a surprise change with Sarapheinna Woulf coming on at goal defence in place of Te Huinga Reo Selby-Rickit with just under three minutes left in the half, but the young defender’s court time proved crucial in the dying minutes of the match.

The Pulse capitalised on a Steel error to narrow the gap to three goals to trail 27-30 at the main break and came out the stronger of the two teams in the third quarter to level the scores at 30-30.

It was short-lived however with the same inaccuracies up front marring their performance and another five-goal run from the Steel silenced the Porirua crowd.

With memories of last week’s horror third quarter still fresh in their mind the Pulse refocussed as the monumental arm-wrestle continued.

Again with two minutes left in the spell, Woulf was injected into the game in place of Selby-Rickit, but it was two late goals which lifted the Pulse who trailed 40-42 with one quarter to play.

An early footwork call on Fisher gave the Pulse the opportunity to close the gap even further and the crowd sparked to life with scores again locked, at 43-43, ensuring a tense final spell.

In a bizarre finish to the match, two players were forced from the court after a check for blood with just under four minutes to play – Selby-Rickit again making her way to the bench along with the Pulse’s Te Amo Amaru-Tibble.

Woulf returned to the game while Ivana Rowland was given her first run in the match, joining Dunn in the shooting circle.

The drama continued as Steel goalkeeper Taneisha Fifita was given two minutes on the bench after her second warning for dangerous play, leaving the visitors to contest the last minutes of play with six players.

Time was against the home side however as they were unable to take full advantage of the player difference although the Pulse was able to grab a valuable bonus point in the last minute of the game.