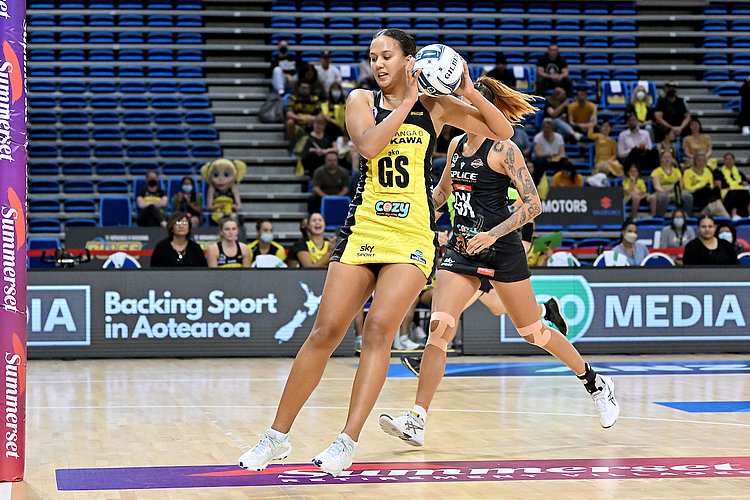 Shooter Aliyah Dunn was an influential figure in the Pulse's dramatic one-goal win over the Magic. Photo: PhotoWellington

Pulsating from start to finish, a buzzer-time goal proved the difference when Te Wānanga o Raukawa Pulse pipped Splice Construction Magic 51-50 in a 60-minute thriller in Hamilton on Sunday.

The Pulse continued their encouraging early season form while the Magic took a big leap forward in their progress as the teams went toe-to-toe from go to whoa.

There were twists and turns aplenty as the lead changed hands on numerous occasions, the outcome drawn out until the dying seconds after Bailey Mes clinched a stunning equaliser when falling out of court.

With time virtually up, a cool-headed Aliyah Dunn calmly slotted the winner in a tense, gritty and absorbing contest.

``It was a really tough challenge,’’ Pulse co-captain Tiana Metuarau said afterwards. ``But it also showed we have a lot of potential.

``Our shifts have been a bit gradual over the last few weeks and I’m just really pleased we managed to get ourselves out of that pressure situation today.

``Our defenders were awesome and we, as attackers, need to treasure ball a little bit more. They got us a ton of ball, so I take my hat off to them.’’

With players missing through illness, Magic called on experience to lend a helping hand in the form of Leana de Bruin, who at 44 years of age admirably got through a full 60 minutes. At the other end of the court, Ameliaranne Ekenasio continued her comeback from the birth of her second child, to play three-quarters of the match.

De Bruin became the oldest to play at the elite domestic level, surpassing fellow greats Temepara Bailey and Irene van Dyk, who both called time when they were 43.

In a glittering career, the impressive defender played a total of 223 national league matches for several teams, including 100 for the Magic, and in her 101st tasked with marking someone less than half her age in Metuarau.

After withstanding early resistance from the Magic, it was the Pulse who gained the upper hand through their free-flowing attacking momentum. That was embellished by the strong connection between their shooters, with Metuarau frequently finding Dunn perfectly positioned under the post with long-range feeds.

The defensive end also had success at holding up the home team’s forward movement but it was the Magic who finished with a flourish to get right back into the contest.

Experienced shooters Bailey Mes and Ekenasio combined expertly to score the last four goals of the stanza to trim the Pulse’s advantage to 14-12 at the first break.

It was more of the same from the Magic on the resumption when they scored the first five goals to nudge into the lead. The next 15 minutes, frantic at times, was full of energetic intent as both teams enjoyed moments of dominance with neither being able gain the initiative.

Mes and Ekenasio continued to grow their budding combination while de Bruin turned back the clock with her ability on the rebound, deflection count and carries through court.

Dunn’s timing and accuracy under the Pulse hoop was of the highest quality while defender Kelly Jury was instrumental in gaining handy turnovers at the other end.

With the lead changing hands several times, a five-goal scoring run for the Pulse gave the visitors’ a slim 26-25 lead at the main break.

The increasingly low-scoring nature of the game was all-too evident during the third stanza where every play and every ball was contested. Fortunes continued to go one way and then the other with the lead following a similar pattern.

Magic centre Claire Kersten built into the game strongly with an increasingly forceful presence while Samantha Winders was her usual industrial self.

Another late surge proved fruitful for the Pulse, a five-goal scoring spree, with Jury a major contributor in an influential quarter from the tall keeper, and the nerveless shooting of Dunn helping the Pulse retain their slim advantage when leading 36-35 at the last turn.