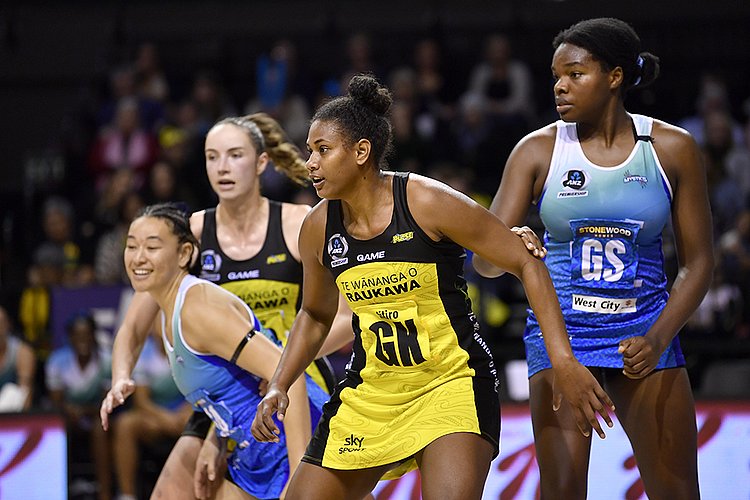 It was a tough night out for the Pulse but goalkeeper Kelera Nawai did plenty of encouraging work to stop the flow against towering shooter Grace Nweke. Photo: PhotoWellington

With an explosive second half performance, the Northern Mystics went on to seize their first-ever ANZ Premiership victory at TSB Arena in Wellington when they stunned Te Wānanga o Raukawa Pulse 58-47 on Monday.

In a battle to get a foothold on the second rung of the points ladder, the defending champions Pulse had the upper hand in the first half, leading 27-23.

But it was a different Mystics side that returned from the locker room, storming to a 22-8 quarter – scoring almost as many goals in 15 minutes as they did in the first 30.

Much of the kudos went to teenaged goal shoot Grace Nweke, who had one of her best games of the season, taking on more than the lion’s share of the Mystics shooting. Showing balance, strength and accuracy under the hoop, she ended the game with 51 from 55 shots at 93 percent.

The Mystics had made a positive start to the match, with sharp circle defence from Kate Burley and Sulu Fitzpatrick ensuring they were three goals up before the home team got a point on the board.

But the Pulse then answered with three in a row, as Whitney Souness placed some beautiful passes into shooters Aliyah Dunn and Te Amo Amaru-Tibble.

While the quarter then promised to take off, it was a low-scoring, scrappy affair, with almost every ball through court highly contested. The Pulse led 11-9 at the first break.

Nweke was heavily guarded by Pulse goalkeeper Kelera Nawai, and with her goal attack Bailey Mes playing more of a feeding role, trying to escape the close attention of Kelly Jury at goal defence, Nweke did well to pull in some perfectly weighted feeds from Peta Toeava.

The Pulse found it easier to thread the ball through court to their two shooters, who were in strong form, and while they would pull away to four-goal leads, the Mystics would drag it back to one – wing defence Fa’amu Ioane, in her 50th national league match, playing the role of spoiler.

With a healthy four-goal advantage to the Pulse at halftime, no one could have predicted what would transpire – or in the Pulse’s case, unravel - in the next 15 minutes.

From the moment they disrupted the Pulse’s first pass-off, it was almost one-way traffic for the Mystics. Playing with a new-found confidence, treasuring the ball and making better choices of when to lob in to Nweke, the visitors went on a scoring rampage.

Centre Tayla Earle was sure and smart with the ball, and Fitzpatrick and Burley were literally running rings around the Pulse shooters, making it near impossible for the Pulse feeders to find those simple inroads that were there in the first half.

Pulse coach Gail Parata made major changes mid-quarter, when the Mystics went on a six-goal spree, moving Souness to goal attack, Jury back to goalkeeper with Abby Erwood in the circle, and Paris Lokotui to wing defence. But little could be done to slow the Mystics down and putting themselves in a commanding position, up 45-35 going into the final quarter.

The flow of goals was almost equal in the last spell, but the Mystics had wreaked enough havoc to take the victory. They also gave goal attack Saviour Tui her first court-time of the season, while the hapless Pulse saw Maddy Gordon limp to the bench for the second week in a row.

``We had a good first half and then we just made a whole lot of silly errors and they accumulated over time. We needed to go back to our game plan and re-set, but didn’t do that and we paid the price,’’ Souness said afterwards.

``Our second half wasn’t the best. We came out after halftime wanting to just keep that momentum going but we dropped off a little bit, so we need to have a look at why that happened.