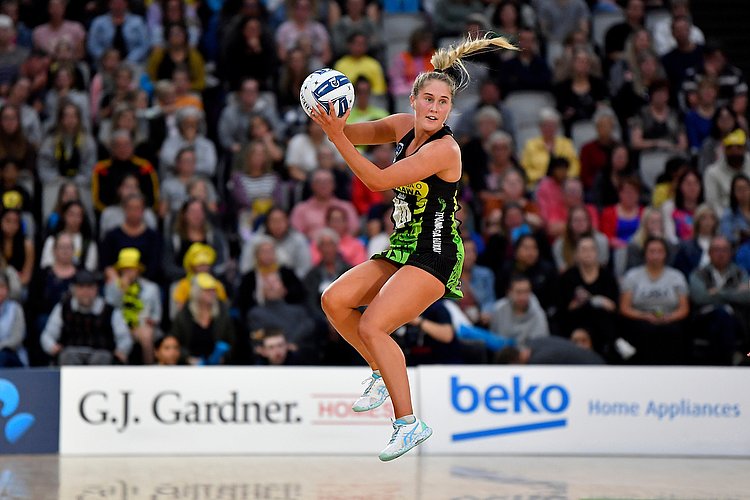 Pulse midcourter Maddy Gordon is set to make her long-awaited return to the court. Photo: PhotoWellington

Gordon’s last proper game was for the Silver Ferns against Aotearoa Men in October but since December, she has been on a restricted programme after damaging the surface of her kneecap.

Bubbly, bouncy and energetic, patience isn’t something that comes naturally to Gordon, who didn’t start running ``properly’’ and adding things like shuttles to her gradual loading programme until last month.

``I really find it hard to sit still and do nothing,’’ she said. ``I’ve been monitored very closely and trusted in the process as I wanted to do everything right. To be fair, the wait could have been longer.

``So, I did what I was told which meant I had to rest for a good 2 - 3 months. That meant doing nothing to let it heal which I found really hard but I knew I had to do it.’’

Having itchy feet is something of an understatement, but Gordon, a two-time title winner with the Pulse, is happy to be returning slightly earlier than expected thanks to sticking to her well-mapped out programme, and couldn’t be more excited.

Involved at every training with advice and interaction with her fellow-middies and restricted duties, Gordon, 22, hasn’t been sitting idle.

``I’ve been to every training, I know all the structures and know what I’m doing, but guess I could be a little nervous around the fact that I haven’t done it in full motion in a while.’’

With Covid and injuries playing their part in a disrupted start to the season, Gordon is happy with how the Pulse are tracking after five rounds.

``I feel really proud of how the girls are going,’’ she said. ``Erikana (Pedersen) has come in from a predominantly wing attack background and has just done a great job of taking on the centre role.

``I think we’re definitely on track. Obviously, we had a little blip on Monday (extra-time loss to Steel) but it’s early in the season, we perhaps needed that and can now really look at ourselves and see where our gaps are and what we need to work on.’’

Pulse coach Yvette McCausland-Durie is delighted to have Gordon, who is unlikely to start the match, back in the frame.

``She’s been really patient in just working through her return play plan and what I’m really pleased about is that it’s been done with strength and conditioning and the physio in a way that we’ve been able to avoid surgery,’’ she said.

``It’s probably felt like forever for Maddy, but long term it’s a really good position to be in.

``We’re slightly ahead of target. We had thought it might take us another couple of weeks but it’s all gone really well. Maddy has had absolutely no pain, no response to the loading and it’s just been a gradual piece, moving from literally just moving, increasing minutes, adding in contesting, adding in contesting and uncontrolled environments to now having her ready to go into match play this week.’’

Not only will Gordon make a welcome return but with the move out of the Covid red light setting to orange, gathering restrictions are removed and matches will, for the first time this season, be played in front of crowds greater than 200.

``You get used to not having crowds there, but you don’t realise that until they are present the contribution that they make,’’ McCausland-Durie said.

``It’s quite significant in adding to the environment and to the quality of experience for the players as well. So, we’re really looking forward to that opening up and having people there to push the players along.’’