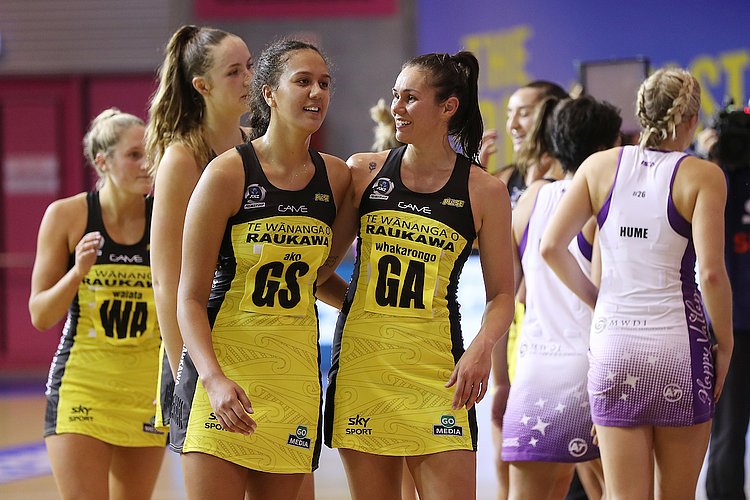 The formidable shooting duo of Aliyah Dunn and Ameliaranne Ekenasio will join forces again for the Pulse in 2021. Photo: Michael Bradley Photography

Combining for a fourth successive campaign, the potent duo will be joined by Te Amo Amaru-Tibble, an astute and experienced campaigner who has been part of the Wellington netball scene for many years and last played for the Pulse in 2017.

Amaru-Tibble, 31, is capable of playing both shooting positions and mixing her game up to cover the main scoring role or the feeding component depending on the team dynamics.

A former NZU16, U18, U19 and junior Tall Ferns basketball representative, the 1.82m Amaru-Tibble was also a member of the NZU21 netball team in 2008. She was elevated to the 2016 Pulse team from the Central Manawa Beko team to replace an injured Jodi Brown and retained her place in 2017. She previously played for the team in 2008-11 during the former trans-Tasman league.

Adding more movement and subtlety to her game, Dunn has been the league’s most accurate shooter over the past two seasons while the majestic Ekenasio is the conductor on attack with her driving play, athleticism and finishing polish.

``In reviewing this season, we had fantastic shooting accuracy so we are absolutely delighted to welcome our two frontline shooters back.  Our work ons for 2021 will be to be more accurate in our ball placement and to generally improve the service to our shooters’’ she said.

``Those are the areas where we could help them and really enhance that magnificent shooting that they give week-in week-out.’’

``Te Amo, who has been playing club netball and basketball, is one of the most accurate shooters in the country. A very wily and smart player, she’s certainly got the experience to back up the two shooters that we have, in both positions and that’s really important for us.’’

Beko player Grace McLean, who travelled with the Pulse during their double-header rounds in 2020 and made her elite level debut, was also in the picture for the third shooting spot. But competition rules around Beko eligibility mean teams can only have two (ANZ Premiership) players turn out in that league.

``We did look really closely at Grace and tried to get an exemption for her to also play Beko, but we were unsuccessful,’’ Taumaunu said.

``Contracting Grace might have meant she would get less court time in 2021 and that, coupled with the cancellation of the Beko League in 2020, determined our decision.  A second season of limited court time would be detrimental for Grace and we are just so fortunate to be able to turn to someone of Te Amo’s calibre and experience to be able to take over the third shooting role for us.’’

With the three shooters named, the Pulse have completed their roster for 2021 which includes six Silver Ferns Squad members and one Silver Ferns Development Squad member while six players have been retained from this year’s title-winning team.

``We’re delighted to retain the core of our team, that consistency gives us real strength as a group,’’ Taumaunu said. ``Welcoming Whitney (Souness) back really shores up that middle court, so we’re pleased about that.

``We’ve got a couple of exciting youngsters in the defensive end and it’s really fortunate they’re going to be playing with the likes of Katrina (Rore) and Kelly (Jury). They’ll learn so much next year and to be able to bring in someone like Amo with her experience, creativity and shooting accuracy, I’m pretty happy with where we’re at.’’